Teenage footballers from London-St. Thomas Croatia Soccer Club (LSCSC) discover what life is like on the other side of the Atlantic Ocean.

The GNK Dinamo Zagreb Academy coaches in Croatia were in London, Ont. recently hosted a camp and taught local players how they train at one of Europe’s top youth academies.

“It’s a great experience,” said LSCSC central midfielder Thiago Herrera. “They teach a lot of things from Europe. It’s a faster pace, lots of passes, and they always want us to play upfield because they see us sitting back.

What other players have noticed is the expectation of advanced technical skills.

“In the first days we observed the weakest part of their technical and tactical training, then we try to give them some ideas,” said Andjelko Ivanjko, deputy director of GNK Dinamo Academy.

Antonio Sisic, youth coach of GNK Dinamo Zagreb of Croatia, briefs members of London-St. Thomas Croatia Soccer Club during a recent training camp in London, Ont. (Source: Brent Lale/CTV News London)He added: “I think they lack foot strength and passing strength. We also have more training during the week, so when you sum it up at the end of the year, it’s a lot more training.

What the LSCSC wants is to give more visibility to its programs for women. They currently have 11 men’s teams and only three women’s programs. They therefore invited Mia Medvedovski, assistant coach of the Dinamo women’s team, to make her first trip to Canada.

“They have a good base, but I’m here to try to improve them or just to try to show them how to improve,” Medvedovski said.

“They love and really enjoy playing games, so we started with that, then we have some technical stuff, then we end with some shots and some touches. The goal of the workouts is to be fun and for the girls to have fun,” she added.

It’s a different experience for teenage girls to learn from a professional coach, and they weren’t expecting the amount of fitness required to play at a higher level. 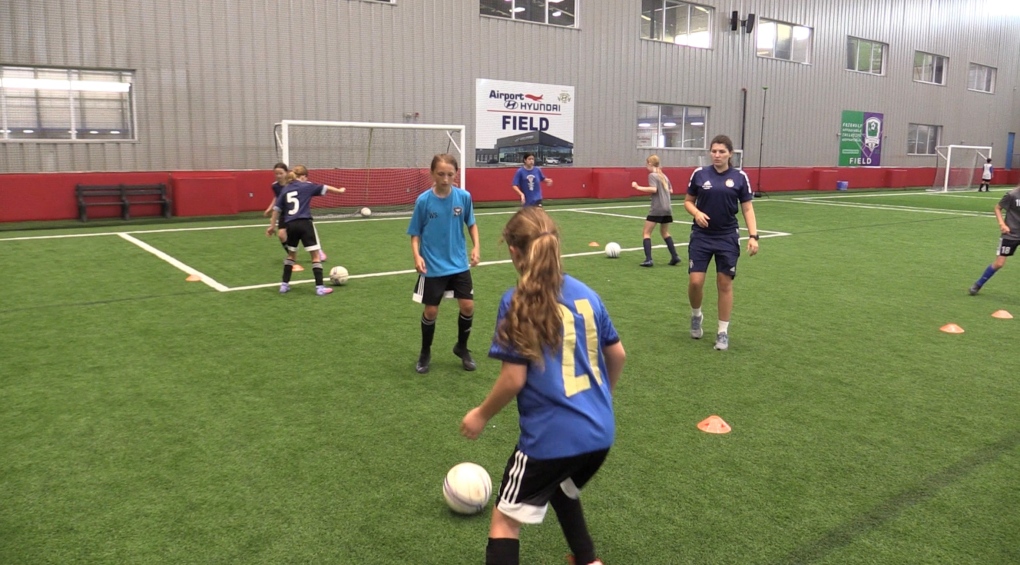 The girls of London-St. Thomas Croatia Soccer Club works on her passing skills under the watchful eye of Mia Medvedovski, assistant coach of Croatian women’s team Dinamo Zagreb during a recent training camp in London, Ont. (Source: Brent Lale/CTV London)“We learned a lot about ball control, passing, shooting, positioning,” added 16-year-old Annalize Borm. “It’s really great to be coached by professional coaches, and it feels more real now that we’re hoping to go do something post-secondary with our soccer.”

The partnership started in March 2021 when the two clubs signed a two-year affiliation agreement.

Their first task was to run coaching workshops on Zoom, and recently two LSCSC players went abroad to train on a trial in Croatia.

Today, the excitement is growing, as local actors are aware of the reality of the partnership and the potential opportunities.

“Potentially playing at a professional level could come out of it,” Fox said. “There are a lot of opportunities for us that we didn’t have before. This grouping allows all these girls and boys to have this chance and it’s great.

Breadcrumb Links sports betting Author of the article: Ryan Murphy, Covers Publication date : May 26, 2022 • 55 minutes ago • 3 minute read • Join the conversation SAN DIEGO, CA – MAY 24: Manny Machado #13 of the San Diego Padres gestures after hitting a single in the first inning of a baseball […]

London Knights’ Brett Brochu: “It’s gone from the best day of my life to the worst”

Breadcrumb Links Local sports Junior hockey Hockey Author of the article: Ryan pyette Team Canada goalie Brett Brochu of Tilbury made a save against Team Austria in the second period of a round robin game at the IIHF World Junior Hockey Championship Tuesday in Edmonton. (photo by David Bloom) Content of the article Brett Brochu […]

What to rely on for Ireland

Ireland head coach Greg McWilliams admits there are areas for his side to work on following a 27-19 loss to Wales in the opening round of TikTok’s Women’s Six Nations. Ireland led 19-15 going into the final ten minutes, but two early tries from substitutes Donna Rose and Hannah Jones meant it was Wales who […]