London & The South dealt a blow in the Racing League title chase on a night of twists and turns at Windsor on Thursday.

In a round that saw five of the competition’s seven teams taste victory, the Championship lead changed hands twice as Wales and the West did their best to outplay their rivals.

With just one point separating the top two early in the evening, Neil Callan had briefly pulled his Wales and West side into the lead with victory over Safari Dream.

There were doubles on the night for The North and The East, while Ireland enjoyed rare success thanks to Jessica Harrington’s raider That’s Just Dandy.

But, the crucial clash came in the penultimate competition as front runner Sean Levey led home a 1-2 for London and the South, helping Matt Chapman’s side to a 48 advantage points as the competition heads into round five at Southwell on September 8. all live on Sky Sports Racing.

How was the fourth round…

With all eyes on the title fight, it was The North who snuck under the radar in the opening race of the night as Vintage Burgundy (12/1) got the better of London & The South’s favorite 5/2 tie.

In a typically spirited five furlong sprint, Vintage Claret rider Connor Beasley and Margo Ghiani on Equality were able to avoid trouble behind by finishing clear of Glamorous Breeze for Wales and the West, which been relegated to fourth after a stewards’ request.

The result briefly extended the lead for Matt Chapman’s side, but Wales & The West immediately fought back as 15/8 favourites. Safari Dream scored in style under Neil Callan.

Rod Millman’s juvenile was himself disqualified at Sandown last month but gave the judge no reason to interfere this time, beating Michaela’s Boy and Gemcutter as The North got more vital points in second and third .

Callan told Sky Sports Racing: “When I got him I thought, ‘Wow, he doesn’t feel like a five furlong sprinter! What he is doing now bodes well.

“From two stadiums down, I always felt he was going to win and he was brave. He will get another stadium no problem and has a bright future.”

Read Special secured success for back-to-back favorites as the 11/4 shot scored for The East in the third race.

Roger Varian’s three-year-old, making his first start since May, was held in good stead throughout by Ray Dawson and galloped to beat Sound Of Iona in Scotland, The North’s Seven Brothers and fellow countryman Aramis Gray in fourth place.

Dawson told Sky Sports Racing: “Fair play to Roger, he’s got this winning horse. It’s nice to see him back after the wind and play because we thought about him a lot.

“He is still very inexperienced but he has a great spirit.”

The East fired in a quick double in 11/1 Dealer withstood the final challenge from New Pursuit (London & The South) in race four.

Luke Morris went from last to first over Simon and Ed Crisford’s three-year-old, with The North back in places with Ana Gold and Irishman Dairerin an unlucky fourth after smashing through traffic.

Ed Crisford told Sky Sports Racing: “It’s great to have 25 points on the board for the team and to pick up some!

“He stumbled coming out of the gates, but luckily there was plenty of pace and he did well.”

Ireland had a miserable time in this year’s competition but picked up a morale-boosting victory as Jessica Harrington, trained It’s just Dandy scored under Dylan Browne McMonagle.

The 9/4 shot showed plenty of heart to beat the London and South favorite Majestic 15/8, with Alablaq for Wales and the West in third.

Just four points separated the top two heading into the penultimate race of the evening, but London and the South stretched with a 1-2 as Disinfectant (15/2) led home teammate Danville.

Sean Levey made no secret of his desire to lift the Jockeys title and £20,000 bonus and the lead rider produced another well-timed attack to score from all 10 furlongs to extend his side’s advantage to 37. 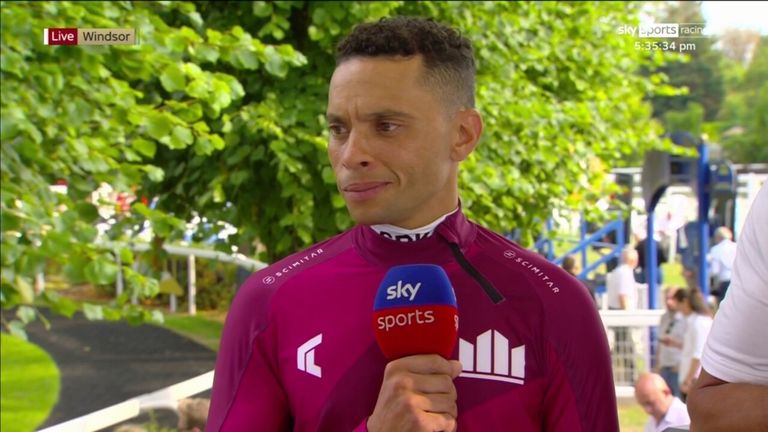 On his title ambitions, Levey told Sky Sports Racing: “This competition is about points, whether it’s winning, second or third.

“I’m excited and appreciate that. The atmosphere in the weigh-in room has been great and it feels like you’re riding at a festival every time you come here.”

Round four ended as it began, with victory for The North.

Young jockey Harrison Shaw produced a superb leading display on Richard Fahey Wootton Sun (9/1) to brave pair Haunted Dream and Eklil of The East, while London & The South picked up valuable fourth and fifth scores with Andaleep and Silverscape.

Breadcrumb Links Local News A clinical trial is underway for a London-made concussion blood test that has just won a patent in the United States, as the local team moves the finger prick test closer to final regulatory and market approval. Douglas Fraser, an intensive care pediatrician and scientist at the Lawson Health Research Institute, […]

Henry Arundell – one of England’s hottest prospects – scored a miraculous try from the length of the pitch, but that couldn’t stop the London Irish from narrowly failing against Toulon. Arundell, just 19, had already been on England head coach Eddie Jones’ radar for the summer tour of Australia, such has been his stunning […]

Breadcrumb Links local arts Julie Bevan will take over the management of the Museum London at the beginning of April, replacing Brian Meehan who is retiring. Photo by Sean Fenzl Reviews and recommendations are unbiased and products are independently selected. Postmedia may earn an affiliate commission on purchases made through links on this page. Content […]